Tokyo is covered by a comprehensive network of train, subway and bus lines, which are operated by many different companies. The train lines operated by JR East and the subway lines are most convenient for moving around central Tokyo.

Tokyo’s major train line is the JR Yamanote Line, a loop line which connects Tokyo’s various districts. Because this is part of the JR network, your Railpass can be used on the Yamanote Line if it’s activated while you’re in Tokyo. The city’s 13 subway lines are operated by two companies and run largely inside the Yamanote loop.

Tickets
A variety of day passes are available for the Tokyo area, however, most of them do not cover all of Tokyo’s train and subway lines. Consequently, single tickets or prepaid cards usually come cheaper, especially if you plan your city sightseeing in a geographically wise way. 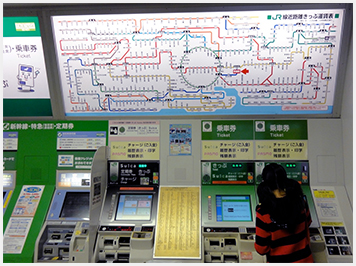 Buying single tickets is done via the machines shown above. The maps above the machines shows the current station in red and the price to each destination station is shown below that station’s name. The machines will have a button or touch screen option for using English.

Prepaid IC cards are generally the recommended way to get around Tokyo. Prepaid cards don’t give you any discounts over single tickets, but they provide convenience as you can ride virtually any train or bus in Greater Tokyo (and many other major cities in Japan) with just a simple swipe over a card reader. They can also be used to make quick purchases at a constantly increasing number of shops in Tokyo (and across the country).

Two types of IC cards are available for purchase in Tokyo: Suica cards at JR stations and Pasmo cards at non-JR stations.

Outside of Tokyo, several other cities also have subway systems and these include Yokohama, Nagoya, Kyoto, Osaka, Kobe, Sapporo and Fukuoka.